From Crayons to iPads 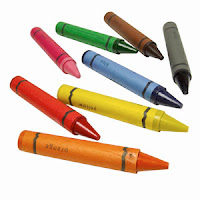 As a child of the 60's and 70's, I often marveled at the changes that took place over the 60 years prior to my birth.  I commented that the world had changed so rapidly in a few short years that I could not imagine what the future held. My grandparents went from horse and buggy (literally, my grandmother moved from East to West Texas by covered wagon) to the first motorized buggy known as the automobile.  They raised families during the Great Depression and Prohibition eras and saw hard labor machinated with cotton gins and factories.   My parents were the children of the Great Depression and World War II.  Their generation commonly experienced death from infection or illness only to see the discovery of antibiotics and life saving vaccines.  They went from listening to radio theatre for entertainment to watching the news in movie theatres and saw the advent of television sets.  Airplane travel, once only for the rich, became a vehicle of the common man. Computers were spawned, although a it took an entire room to contain them.  Then came my generation witnessing the launch of NASA and the first man on the moon. Our war was Cold and the weapons were fear and superpowers.  The gigantic computers became smaller until finally PC's were born and every home could have it's own computer.  The digital age was born.  Our LP's became 8-track tapes, cassette tapes, and CD's, and now they are MP3 and digital.  The microchips are smaller, but the amounts of data they hold is massive.  Technology has not slowed down but has exploded like a rapidly expanding super nova.  For me it is all a bit mind-blowing (to coin a generational term).

So here I am as an older SLP, having gone from crayons in the therapy room to an iPad.  I never asked for nor really even wanted an iPad.  My dear husband, who is typically of a frugal nature, presented it to me for my 50th birthday.  I must say I was quite stunned.  Now, I had owned my iPhone for about one year at this time, having succumbed to the allure after my oldest son had his for about two years.  I must say, I was amazed at the technology in the palm of my hand as I discovered a well of seemingly limitless information (usually revealed to me by a client).  Most of you younger people out in cyberspace would shake your heads in pity at the minimally used devices in hands such as mine.  I do not think I will ever mine the depths of these devices.  I read SpeechTechie blogs and try to skim bits and pieces of information to enlightened my Stone Aged mind.

Well, I stared dumbfounded at the box thinking surely there is something else inside of this thin white box.  I opened it up and discovered this giant iPhone-like device and proceeding to play with it.  I could immediately see the appeal it held with its large lighted screen and brilliant graphics.  My admission now is that I use it almost solely as a therapy tool, and sporadically at that.  I commenced downloading as many free apps as I could find.  I discovered that though they hold motivational value and some very basic skills learning, most apps, especially free ones, had little "meat on their bones".  I have purchased a few more expensive apps and find them a bit "more filling".  All in all I am still in the learning curve with this device. That learning curves seems to take a bit longer for me now than 25 years ago... and being insanely busy running a private practice tends to interfere with the learning process as well.

Having possessed my iPad for 2 months now, I offer some of my limited insights.  I think it is a marvelous tool to add to my arsenal; notice I said "add to" not "replace", crayons still have their place.  I have some teenage boys I see in social groups and in individual sessions.  The promise of one or two rounds of Angry Birds at session's end is enough to bring the snarkiest attitude full circle to cooperation, and even help them remember to bring in home work (most of the time).  There are some great apps for motivating a child to complete a set number of artic drills in order to get a turn on the device.  I am seeing more and more language based apps for developing vocabulary, grammar, sentence development, and processing skills.  But, I think the biggest payoff has been with my most difficult Autistic clients.  I have two such clients at the moment.  The first is a boy who is bright but quite involved behaviorally with his Autism.  His attention span is fleeting but he seems to enjoy many of the apps.  A problem for him is becoming over-stimulated with the device and wanting to press the button to close the programs.  So, as of now, the use is limited.  We utilize some of the AAC apps such as the "yes/no" button, the PECS Working4 token reinforcement app, and a choice board.  A feature I really love is the camera and video with a nice large screen. It allows me to take photos of the toys I have on hand and place them directly on a choice board.  My other client is a non-verbal (though very vocal) girl with a significant degree of Apraxia.  She was given to lying down on the floor or crawling under the table when she had had enough of an activity.  She will take the iPad, swipe the pages, find her favorite game, and proceed to play it. Her games all have educational components such as matching, puzzles, fine motor pre-writing skills, etc. that were only minimally tolerated with pencil and paper tasks.  I am not sure what is the intriguing feature of the device, but it seems to hold some power over this population.  Here is a very interesting piece on 60 Minutes about iPads and Autism.  Here is a link to my Facebook page where I am listing favorite apps (I am a bit behind on adding apps but hope to work on it some over the next week or two so be sure and check back for updated finds).

As the old adage goes, "If you can't beat them join them!"