Over the years I have worked with a number of children with cognitive challenges.  Learning their ABCs is a difficult task and learning the sound associations for the letters can be even  more difficult.  In addition to working with this population I was also simultaneously working with children who had Apraxia, a motor speech disorder, and children with various delays or disorders in speech production.  I observed that almost all of the children, even some of the ones with Apraxia could imitate environmental sounds such as animal noises, car sounds, etc. I had been using a purchased product called Easy Does It for Apraxia.  In this program each speech sound is assigned an environmental sound in order to help the pre-literate child learn their target sound. ("K" is the dinosaur sound since dinosaurs were so large that they crashed "k-k-k" when they walked).  This is not a novel idea since Speech Pathologists have always used this method (I learned it 30 years ago as an undergraduate).   But since I was working with this specific program I adopted most of the sounds they used (even though some of them were less than ideal).  This is when I realized I had at least three clients in my caseload with varying degrees of cognitive impairments and all of their mothers were asking me about literacy skills for their children. All of these children had already spent several years in school trying to learn by traditional methods.  These methods were not working for them.  Most schools use the correspondence of the intial sound of a word to teach the phonic sound of the alphabet: A-apple, B-banana...  As an SLP working with speech sounds, I understood how difficult it can be for some neurotypical children to understand word and sound segmentation and that children with cognitive impairments would also struggle with this task.

The SLP neurons started firing and I tried to devise another method for my clients.  Most of these clients were able to learn the basic sound symbol associations using this devised strategy.  Those with milder impairments eventually understood enough of the basic skills and then went on into learning literacy skills by more traditional methods.  The children with greater cognitive issues all learned the sound symbol correspondences but did not really go on to be literate.  However, they did learn enough to be able to use prediction settings on various devices since they could identify initial sounds and basic vowels in order to key in word portions.  In this way they did develop rudimentary phonics skills.  I understand that most cognitively impaired children are taught primarily by sight word methods, however I still feel there is a benefit to having some basic phonics skills.

My disclaimer in presenting this idea here is:  Always attempt traditional methods for literacy development, but if those methods fail over time, this is an alternative method that could be tried to teach the basic skills.  This method is to serve as a bridge to understanding sound-symbol correspondence and then pick up more traditional methods when possible.  One more important note:  The limited time in speech therapy sessions is not adequate for learning this, copies of all must be sent home with the parent to work with their child at home. 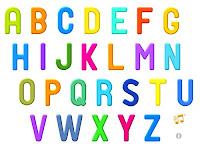 Step 2: Learn to order the alphabet: Once they demonstrated this skill, we worked on laying out the alphabet in order. First I traced ABC cut outs and made an alphabet line to match letters. For lower cognitive clients, I broke the line into groups of 5-6 letters for practice. Clients did not have to master ordering before we worked on sound symbol correspondence.

Step 3: Sound symbol correspondence: This skill does not have to be addressed in any specific order. If the child was working on speech sounds, I chose those targets first since the children were already familiar with the corresponding environmental sounds (e.g. /l/ singing sound, /s/ snake sound... Although I used a lot of the sounds from the program, I substituted some with sounds I felt more appropriate or easier to be identified). Most of the time I presented the sounds in alphabetical order since it was easier to keep track of the presentations. Depending on the cognitive skills of the client I presented groups of letters and sounds 2-5 at a time. We played with toys that correspond to the sounds (/s/ rubber snakes which we slithered around the room while saying "s-s-s-s:).  The short vowel sounds were introduced initially since most traditional methods do this and since those are encountered first in the phonemic awareness step. I also made letters for several sounds that incorporated the symbol in some way: either the sound was pictured on the letter or the letter was morphed into the object associated with the sound. As we played the sounds games, we matched the items to the letters. Most of the children learned them fairly quickly. 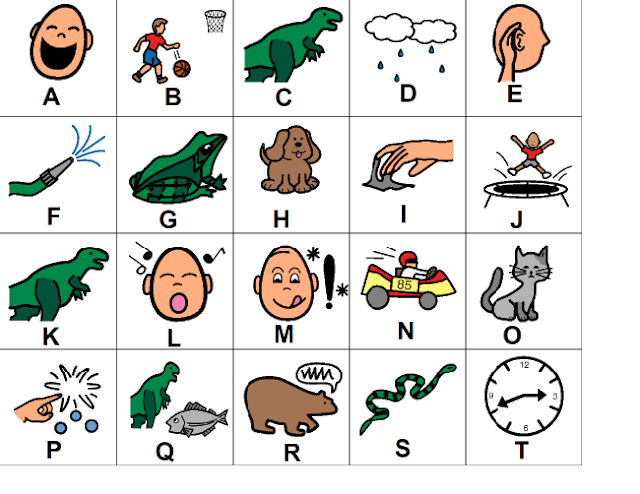 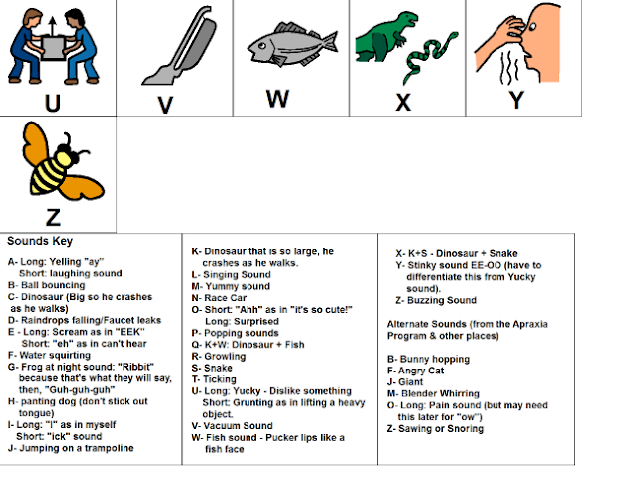 Step 5: Phonemic Awareness - Sounds in words:  At this point I had a magnetic board with magnetic squares of the alphabet.  I wrote the alphabet on the board with a Sharpie and arranged the letters in alphabetic order (So that they could return the letters to their proper places in the sequence, making them easier to locate when needed and to further reinforce alphabetical order).  We then began working on c-v and v-c combinations (real and nonsense words).  I would say /æ/ ("a") and the child would place the A, then /t/ and the child would place the T.  Then we would run our finger smoothly under the word to blend the letters into "at".  I worked on blending immediately to avoid the child segmenting the sounds during production. (It always drives me crazy when a child has not learned to blend sounds smoothly.)    Once two sound combinations were mastered we proceeded to c-v-c words: "h-a-t".  I worked in word families to increase success: at, hat, bat, cat, mat,...

Step 6:  Phonemic Awareness - Initial sound changes in words:  Once that skill was mastered we worked on word changes.  At first I only worked on intitial sound changes.  "Spell the word "at"; add a sound to make it say "hat"; change "hat" to "bat"."  Word changes required some help initially with lots of verbal cues (added emphasis, reps of initial sounds...) but once they understood to listen to the first sound and segment it back out of the word then replace it with another letter they were hearing, they were able to be independent.

Step 7:  Phonemic Awareness - Final sound changes:  Same as above but at the end of the words.  Once again they learned that sound changes can occur at beginning and ends of words. Then I would mix up the two positions: "Make the word 'in'. Now make it say 'pin'. Change 'pin' to 'pit'. Change 'pit' to 'hit'."

Step 8:  Phonemic Awareness - Medial sound/vowel changes:  Now they understoond that any sound in the word could change and their ears were able to listen and hear what those sounds were.  We then mixed it up and played with changes everywhere in the word:  Spell "hat"; change it to "bat"; now "cat", now "cap", "tap", "top" "tip".....

Step 10:  Hooked on Phonics:  At this point the child is ready for more traditional methods and the program I had on hand was the Hooked on Phonics program.  This program pulled in diphthongs, sight words, and other spellings.

The only part of this program that is really different is the method of learning the sound-symbol correspondences.  I admit I have only used it a handful of times but I was surprised how children that I did not think could learn this skill were able to do so.

Phonemic awareness methods are invaluable for all children in their literacy skills and I have used them often in therapy.  I especially spend time teaching this with my clients who have both significant speech disorders and language impairments because these children are at risk for literacy problems also.  These skills fit well with practicing our articulation, phonology, and auditory processing skills.
Posted by Suzanne Herman, M.Ed., CCC-SLP at 10:49 PM No comments:

The Phantom Tollbooth is a fun book to use with older kids.  I typically pull this out for a middle school to high school aged student with language difficulties.  This book is chock full of vocabulary and figurative language.  It can be quite humorous.  It also usually requires a good deal of discussion and explanation for the language disordered student to grasp many of the ideas.

The main character, Milo, a very bored little boy,goes on a journey via a magic tollbooth.  He encounters a number of strange characters in the Lands Beyond.  He returns from the journey a very imaginative boy.

When working with a long book I generally do the following:
Some good objectives for this book:
Here is a list of mined resources on the web: